The Rise of Depression and the Cannabis Response

The Rise of Depression and the Cannabis Response
By Susan Boskey

Are you experiencing depression? If so, you are not alone and are among the millions of Americans plagued by this mood disorder. A recent article shared new statistical details about how depression in the U.S. is on the rise.

The good news, they say, is that "universal depression screenings" are happening more routinely, and that this mood disorder is no longer in the closet: people are talking about it and treating it... with pharmaceutical drugs.

I am left to wonder why this depressive state has grown by leaps and bounds? For one thing, there's a whole lot that has changed in the world since January 1, 2000. It's enough to make anyone depressed.

I probably missed something, below, but here are the examples I can recall:


Of course, this list does not include challenging personal situations most of us experience from time to time.

Pharmaceutical companies are the big winners.

Though most of the antidepressant-package inserts warn of one or another side-effect, pharmaceutical antidepressants are the ubiquitous 'go to" solution and coping mechanism for depression.

Additionally, besides the side effects, many people report difficulty in getting off antidepressants when they are ready to do so.

Depression has been linked to increased neuro-inflammation. It is common knowledge now that inflammation is a precursor to many different disease processes.

Cannabis is known to reduce inflammation and holds great promise in studies about depression. (3) Due to its chemical compounds, especially THC and CBD, actual healing, not just symptom masking, can occur to restore deficient parts of the brain and immune system. (4) It is non-toxic, cost-effective and has little to no side-effects whatsoever.
"... the team analyzed data from Strainprint, a mobile application cannabis users can use to track changes in symptoms after using different doses and cannabis chemotypes. Overall, self-reported symptoms of depression decreased by 50 percent." (5)

So why don't more people try cannabis medicinally before heading down the pharma trail? I suggest there are three main reasons:

A friend of mine used cannabis medicinally to help her recover from depression after nothing else worked. She said that it gave her back her life, which inspired her to share her experience with others.

As far as I can tell the multiple devastating events of this 21st century have radically changed the world from as we once knew it: disorienting at best and depressing at worst for those who know the difference. That said, I believe it is still absolutely possible to take flight from depression and remain emotionally and mentally well through it all with the assistance of responsible, therapeutic cannabis use.

Susan is a 2018 graduate of the Holistic Cannabis Academy with over 45 years of personal involvement in the spectrum of wellness modalities. Her mission today is to intervene in the noise of modern life and help people identify and remove stressors that trigger their dis-ease while providing strategies towards a living experience of inner calmness, contentment and inspiration.
Her path to becoming a lifestyle-wellness and cannabis coach became clear at an early age as someone who always asked, 'why', questioning social conventions. Her curiosity about life, and health in particular, fueled her determination to learn everything she could and help others. Susan's private practice (in-person and on Zoom) is based on the paradigm of whole-person wellness, body, mind and soul, and including one's lifestyle. As a non-physician coach she enjoys the added flexibility of providing in-depth care plans for her clients. Visit her website: http://lifestylewellnessrx.com
Article Source: [http://EzineArticles.com/?The-Rise-of-Depression-and-the-Cannabis-Response&id=9943792] The Rise of Depression and the Cannabis Response
- December 27, 2018

11 Vital Benefits of CBD Oil That You Need to Know

CBD oil has become one of today’s most popular trends in herbal medicine and taking it has been promoted as a way to relieve the complicati... 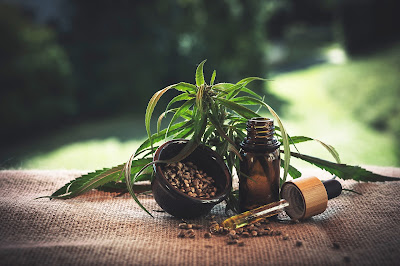